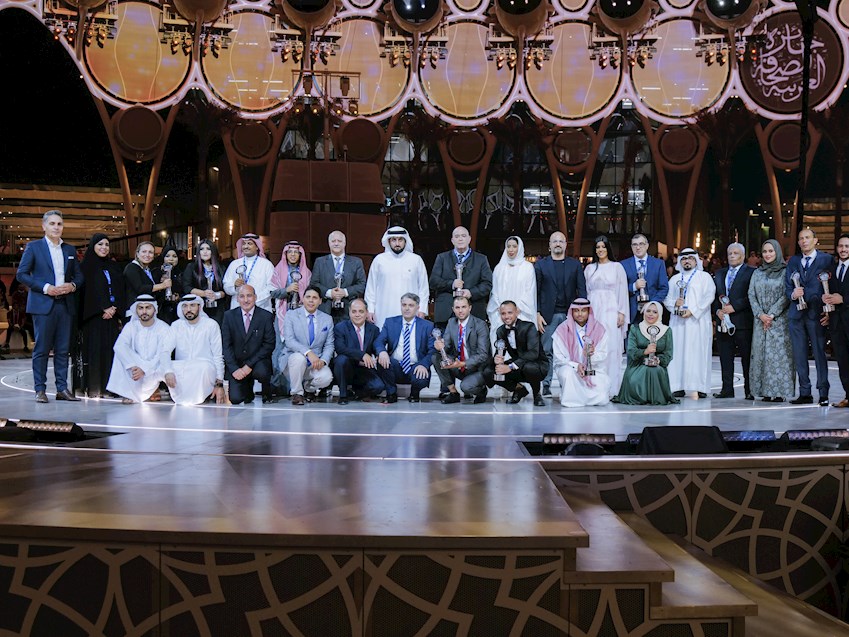 Under the patronage of His Highness Sheikh Mohammed bin Rashid Al Maktoum, Vice President and Prime Minister of the UAE and Ruler of Dubai, and in the presence of His Highness Sheikh Ahmed bin Mohammed bin Rashid Al Maktoum, Chairman of the Dubai Media Council, winners of the 20th edition of the Arab Journalism Award (AJA) were honoured today at a ceremony held at Expo 2020 Dubai’s Al Wasl Plaza.

The ceremony, organised by Dubai Press Club, the General Secretariat of the Award, was attended Her Excellency Mona Al Marri, President of DPC and Secretary General of the Arab Journalism Award, Diaa Rashwan, Chairman of the Board of the Arab Journalism Award, editors-in-chief of local and Arab media organisations as well as prominent Arab journalists.

The award ceremony started with a short video about recent events worldwide. Singer Latifa sang a song during the event, whose lyrics were written by His Highness Sheikh Mohammed bin Rashid Al Maktoum.

The winners of the Arab Journalism Award came from daily newspapers, magazines, online web portals and media organisations from across the Arab world.
HH Sheikh Ahmed bin Mohammed bin Rashid Al Maktoum honoured Emad El Din Adib, a prominent media figure, with the Media Personality of the Year Award for his contributions to journalism in Egypt and the Arab media landscape.

HH Sheikh Ahmed also honoured author and journalist Dr. Abdelilah Belkeziz with the Best Column Award. Dr. Abdelilah Belkeziz has published numerous articles and op-eds in major Arab and regional newspapers. Belkeziz’s works include more than 50 books spanning several genres including philosophy, humanity and Islamic studies, in addition to several literary works.
During the ceremony, the Chairman of the Dubai Media Council also honoured Sabq online newspaper with the Smart Journalism Award for using advanced technologies in promoting content.
Diaa Rashwan, Chairman of the Board of the Arab Journalism Award, congratulated the journalists and media institutions who were recognised in the prestigious award. He said that the winners were selected based on an assessment process that followed the highest standards of practice.

Congratulating the winners in the 13 categories, Maitha Buhumaid, Director of DPC, said the guidance of His Highness Sheikh Mohammed bin Rashid Al Maktoum and the Award’s Board have played an instrumental role in its success over the last 20 years.

Buhumaid underlined the role of the Award in stimulating creativity in the region and improving the quality of journalism and media in the Arab world.