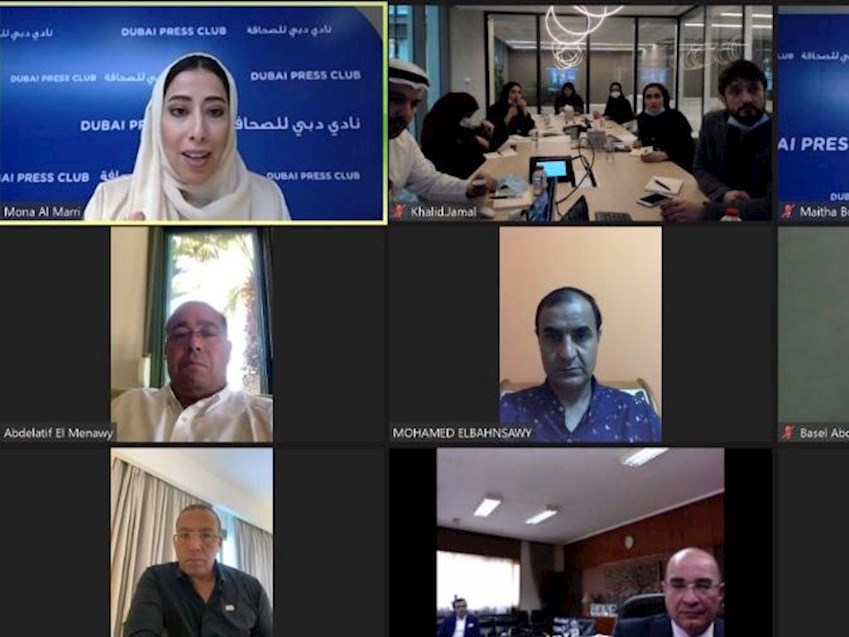 The Dubai Press Club (DPC) held a virtual meeting with editors-in-chief of prominent media outlets in Egypt to explore new avenues for collaboration to promote the growth of Arab media.

The engagement forms part of a series of activities being organised by DPC in the run up to the 19th edition of the Arab Media Forum (AMF), which will be held virtually on 20 October under the patronage of His Highness Sheikh Mohammed bin Rashid Al Maktoum, Vice President and Prime Minister of the UAE and Ruler of Dubai. The meeting is in line with DPC’s keenness to strengthen ties with the Arab media sector and the broader international media community.

Her Excellency Mona Al Marri said the interaction was part of DPC’s efforts to maintain close relationships with media institutions across the region. The meeting reflects DPC’s commitment to foster the development of the regional media sector by maintaining constant engagement with media in various Arab countries.

Noting that Egyptian media are major players in the regional industry, Her Excellency said DPC is keen to interact with media institutions in the country to enhance cooperation and share knowledge, expertise and ideas.

“In line with the vision of His Highness Sheikh Mohammed bin Rashid Al Maktoum, DPC has always been keen to explore new approaches to raise standards of regional media excellence and offer a platform for Arab media dialogue.  Our virtual meeting with editors-in-chief of Egyptian newspapers sought to discuss strategic approaches to reinvigorate the regional media sector and ways in which Dubai can contribute to media advancement in its role as Capital of Arab Media for 2020,” Her Excellency said.

Maitha Buhumaid, Director of DPC, said that since its inception in 1999, DPC has explored new ways to foster dialogue amongst the Arab media community and made key contributions to creating a close-knit industry. These contributions have had a huge impact on the transformation of regional media.

Buhumaid thanked the participants in the virtual meeting for sharing their insights on critical regional media issues that will be part of the Arab Media Forum’s main agenda this year. “Over the years, DPC has developed close linkages with Egyptian media. They have been active and prominent participants in all the regional events organised by DPC in the last two decades,” she said. “Through such meetings, DPC aims to facilitate constructive dialogue between regional media organisations and industry professionals,” she added.

Participants at the meeting expressed their appreciation for Dubai’s efforts to promote Arab media cooperation. The meeting also discussed opportunities for collaboration in the field of training and exchange of expertise between journalists in the UAE and Egypt, in addition to other joint media initiatives.

The shifts created as a result of the pandemic and other key industry challenges and opportunities will be the focus of the series of virtual meetings to be held by DPC ahead of the 19th edition of the Arab Media Forum in August and September 2020.

Yesterday,DPC announced that the 19th edition of the Arab Media Forum (AMF) will be held virtually on 20 October 2020. Following the main event, a series of virtual sessions to be held until the end of the year will continue the dialogue on the Forum’s main themes. Global trends and future growth drivers for the industry will be the key focuses of the post-Forum dialogue sessions.