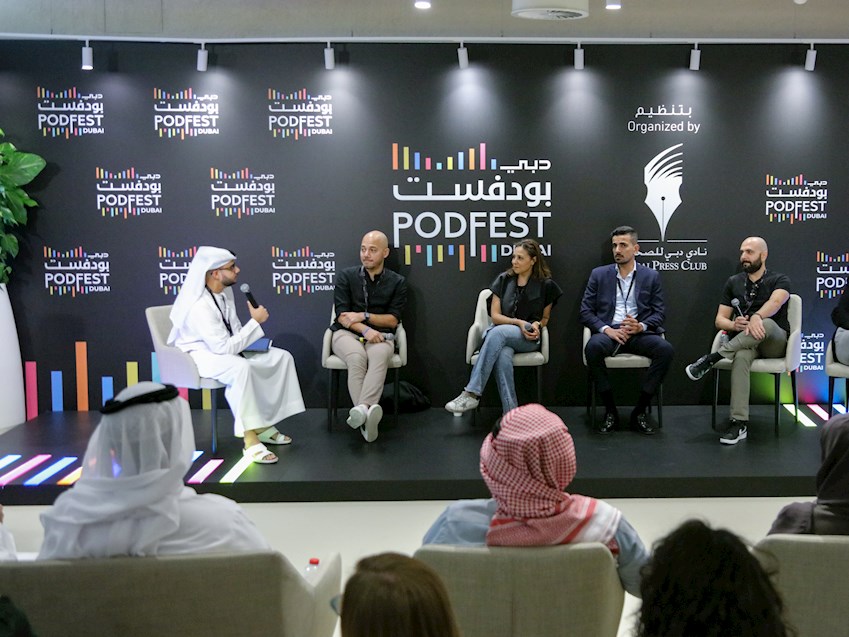 User trends of podcasting consumption in the region clearly show that the sector is set for significant growth in the coming years, according to speakers at the second edition of Dubai PodFest 2022, held in Dubai today.
Held under the patronage of His Highness Sheikh Ahmed bin Mohammed bin Rashid Al Maktoum, Chairman of the Dubai Media Council, the region’s leading event dedicated to podcasting brought together prominent podcasters, audio content creators and leading organisations in the industry, to discuss the future of podcasting in the region.
Sharing his insights on the region’s podcasting industry, Claudius Boller, Managing Director for Middle East and Africa (MEA) at Spotify, the world's most popular audio streaming subscription service, said that based on current user trends, regional podcasting looks set to grow significantly. “When a user tunes into podcasting in addition to consuming music on Spotify, the consumption doubles or triples. This makes us confident of the future of podcasting in the region. This is still the very beginning.” The high level of trust audiences have in podcasting content, compared to other platforms, increases its growth prospects, Boller said.

Endorsing the positive outlook for podcasting, panelists at another session titled ‘Rapidly Changing World of Podcasts’, said that audiences in the region spend more time listening to podcasts compared to the global average, which points to the significant potential of the sector. Panelists at other sessions also said that podcasting is gaining momentum in the Arab region, and the region could potentially be a key player in shaping the future of the global digital content industry.

A panel discussion titled ‘The Future of Podcasting in the Region’ highlighted the importance of creating powerful and diverse content that aligns with the interests of listeners. The session also underscored the need for podcasters to take advantage of social media networks to grow their audience.

Panellists urged young aspiring podcasters to launch their own podcast by using simple tools and ensure their content remains unique and inspirational. Panelists also noted the importance of spontaneous and truthful content.

A session titled ‘PodFest Chat’ discussed the role of podcasts in presenting motivational stories that touch people’s lives as well as the rising popularity of podcasts among the region’s youth. Speakers at the session, moderated by NourAldin AlYousef, who runs his own podcast called ‘White Talk’, highlighted the power of podcasters to influence listeners regardless of the number of subscribers.

Another panel discussion ‘Voice and Video in the World of Podcasts’, discussed how podcasters are merging audio and video, and using various social media platforms such as YouTube, Twitter and Instagram to reach diverse listeners. Podcasters are also integrating graphics to make their content more compelling.
Panellists said that regardless of the medium, content and its ability to impact audiences matter the most. Podcasters are even filming their podcasts to expand their audience base, they said.

Dawud spoke about the topics being featured on her show since its launch in 2019. Dom Tak mainly discusses the relationship between music and people. The speaker shared her experience of creating six seasons of her podcast, which attracted an audience of 1.6 million listeners in the Arab world.

In another 20-minute session titled ‘Art of Satire in the Podcasting Space’, podcasters Bader Noor, Jamal Ramzy and Abdul Rahman Mohammed spoke about their experience of running successful satirical podcasts that discuss a range of issues that impact people’s lives.

Panellists talked about ways to address the growing financing challenges facing Arab podcasting. Strategic marketing and promotional campaigns are critical to generate revenue, they said. They also discussed the importance of supporting independent producers of Arab podcasts, especially those that target the youth.

Dr. Al Ghamdi said that the success of podcasts is initially driven by the quality of content and audience engagement. While financial sustainability plays a critical role in success at a later stage, content is the most important factor that wins over potential investors. Alagel underscored the importance of producing quality content before seeking funding.

Panellists at another session titled ‘Rapidly Changing World of Podcasts’, said that though listeners in the region spend more time listening to podcasts compared to the global average, when it comes to investments in audio content among brands, the region lags behind.

Lemya Soltani said that an increasing number of brands in the MENA region are interested in podcasting. Though the investment by brands in audio content in the region has always trailed the global average, the situation is set to change, with stakeholders working to educate brands about the benefits of podcast advertising.

Chirag Desai, Founder of the Amaeya Media Network, the UAE's first independent podcast company, said that podcasting has fewer ‘barriers to entry’ for independent companies compared to other sectors like radio, which involves high licensing and equipment costs.

Desai said that there is a new advanced version of podcasting featuring exciting innovations that is emerging globally, which is called Podcasting 2.0. Such innovations include technologies that give users the ability to make micro-payments to podcast creators and the location tagging of podcast episodes. These new features have been made possible by the decentralised nature of podcasting, which allows independent players to expand and innovate relatively easily.

Another session entitled ‘Podcasting: A Growing Medium for News’ discussed the complementarities between podcasting and TV broadcasting.