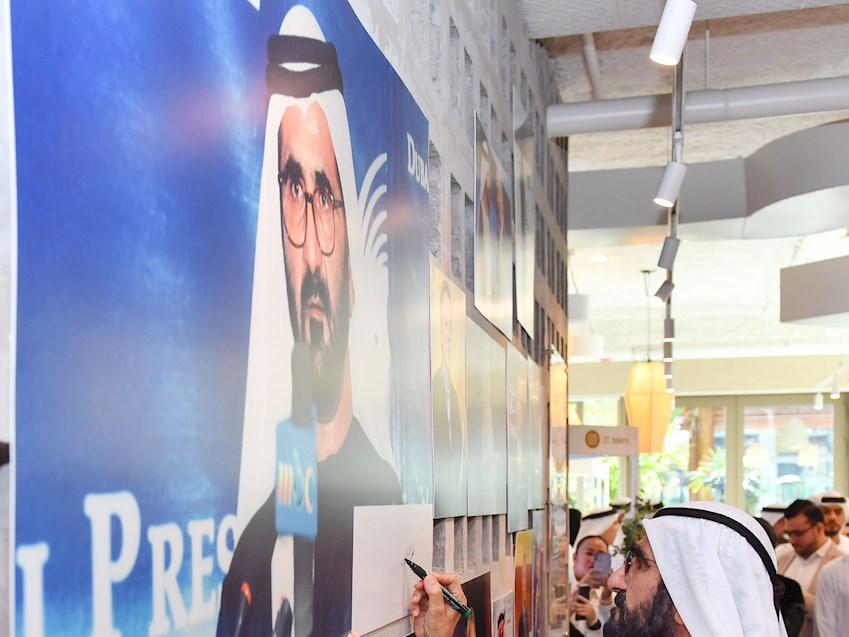 His Highness Sheikh Mohammed bin Rashid Al Maktoum, Vice President and Prime Minister of the UAE and Ruler of Dubai, said that the UAE has always been a leader in launching initiatives and projects that serve the people of the region and the world. As part of its vision, the nation will continue to be a model for development across various fields.

In this context, His Highness said the media sector is a vital focus for the nation. The country’s leadership is committed to supporting the growth of media both in the government and private sectors.

“We have always focused on taking proactive initiatives to advance our development; 20 years ago, we realised there was a gap in this part of the world for an organisation that can bring together media professionals and offer them a platform to discuss the reality and future of their profession. The initiative to establish Dubai Press Club sought to bridge this gap and encourage industry leaders in the country and beyond to engage in a dialogue on developing the media sector and contribute to transforming the region,” His Highness said.

HH Sheikh Mohammed made these remarks at DPC’s new headquarters in One Central, Dubai World Trade Centre, where he attended a celebration to mark the 20th anniversary of Dubai Press Club’s establishment under his directives. The celebration coincided with a ceremony to hand over the trophy for the title of ‘Capital of Arab Media 2020’ to Dubai.

HH Sheikh Mohammed expressed his appreciation for the contributions made by the Dubai Press Club, its major local and regional initiatives, and training and educational programmes. His Highness stressed on the need to expand opportunities for young media professionals by imparting the skillsets they need to excel.

"The media touches the lives of people on a daily basis. It influences them and is influenced by them. It is important to create the best environment to foster the development of exceptional media expertise as part of our broader aim of meeting the aspirations of the people.”

His Highness praised DPC’s initiatives to develop the region’s media and facilitate constructive dialogue between media leaders locally, regionally and internationally. "Every year, we welcome thousands of media professionals from various Arab countries and the world. We support an intensive dialogue between various players to help raise the quality of media content so that it exerts a positive impact on society. Our aim is to make Arab media a source of hope and optimism for the future."

Also attending the event was a group of directors of government departments and institutions in Dubai, including HE Saeed Mohammed Al Tayer, Managing Director and Chief Executive Officer of Dubai Electricity and Water Authority (DEWA); HE Matar Mohammed Al Tayer, Director General and Chairman of the Board of Directors of the Roads and Transport Authority (RTA); HE Hesham Al Qassim, Vice Chairman and Managing Director of Emirates NBD Group, and HE Malek Al Malek, Group CEO of TECOM Group.

On November 1999, HH Sheikh Mohammed inaugurated the Dubai Press Club in the presence of Emirati, Arab, and international media industry leaders, to create a platform for bringing together business leaders and journalists as well as thought leaders in the fields of economy, politics and science. The Dubai Press Club also sought to create a forum for bridging cultures and generating new ideas for the media sector’s development.

Over a period of 20 years, DPC continued to launch pioneering initiatives that played a major role in the development of the Arab world’s media industry and fostered industry excellence and dialogue. Key among them are the Arab Media Forum (AMF), the region’s largest media gathering; the Emirati Media Forum (EMF); and the Arab Social Media Influencers Summit (ASMIS).

Serving as rich platforms for sharing knowledge, these initiatives have offered media influencers and thought leaders from across the region the opportunity to discuss ideas on accelerating the media’s development and exchange perspectives on social and economic issues impacting its growth.

Since its inaugural edition in 2001, DPC’s flagship project, the Arab Media Forum has emerged as the most comprehensive platform for knowledge exchange in the Arab media community. The annual platform, which attracts over 3,000 prominent thought leaders, has steadily evolved in scope and reach to encompass a broad international outlook.

The Emirati Media Platform (EMF) was another unique platform established for the UAE media community to discuss the local and regional media landscape. EMF editions over the years have analysed the present and future prospects of the UAE media and offered insights and knowledge on how local media leaders can develop the capabilities required to excel and sustain their growth.

The Arab Social Media Influencers Summit (ASMIS) was introduced by DPC as part of its mission to help the region’s media community stay abreast of industry developments. The region’s largest platform for social influencers, which also includes the Arab Social Media Influencers Award, looks at ways to enhance social media’s role in serving the Arab community and creating the right environment for its positive use.

Promoting knowledge exchange and capacity development have been some of DPC’s key focuses since its inception.  During the second edition of ASMIS, DPC established the Arab Social Media Influencers Club (ASMIC), the first club of its kind in the Arab world dedicated to developing the skills of social media influencers. More recently, the Dubai Press Club launched the Influencers Diploma Programme, the world’s first accredited diploma programme for social media influencers.

As part of its commitment to accelerating media development, the Dubai Press Club sought to create a comprehensive and authentic source of data on the Arab media sector with the launch of the Arab Media Outlook.

Over the years, the Dubai Press Club has invited prominent media figures, academics and experts to share their expertise with media professionals and impart cutting-edge skills. One of the most important of them is the Media National Youth Programme (MNYP), a joint initiative launched in partnership with the Watani Al Emarat Foundation and over 40 media and academic institutions. The largest of its kind in the Middle East, the Programme aims to equip the new generation of Emirati journalists with the tools and skills needed to excel in the media industry.

The Dubai Press Club also organises the Media Leadership Programme, a training programme launched in 2017 in collaboration with the National Defense College (NDC) in Abu Dhabi, aimed at improving the skills of senior leaders of major media organisations, to identify and assess challenges to national, regional and international security.

The Dubai Press Club continues to be inspired by Dubai’s ambitious vision for the future and looks forward to launching further pioneering initiatives aimed at raising standards of media excellence in the region.